Bengtol teenager transforms himself and others through education and awareness 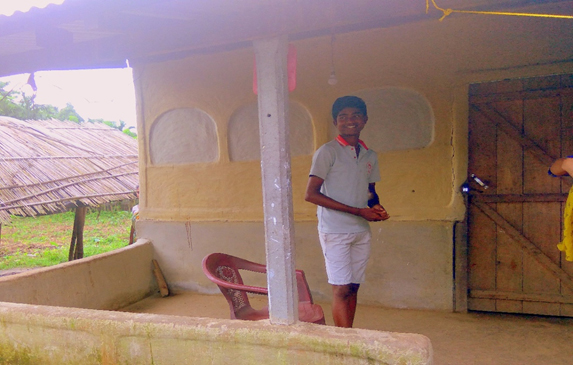 Along the quiet lanes of Serfanguri, a Santhali hamlet in Bengtol village, Marcel Tudu, a chirpy boy of 14, plays animatedly with his friends. What sets Marcel apart from his peers is his enthusiasm to learn new things, and to use this knowledge to better understand his immediate surroundings and the problems that plague his community. “Poverty is the hurdle that we need to overcome and education is the only means to be a part of a better world,” says the bright teenager.

Marcel is part of the Youth Group, formed as part of Project Dolphin by the organization the ant, with support from terre des hommes Germany. To promote sustainable development, the ant invites active participation from Santhal/tribal youths to uplift themselves and integrate into mainstream Indian society. Marcel was introduced to the Youth Group when he joined as a trainee supervisor to conduct summer camps at the ant’s campus. The camps were for kids from Class 3-5 and youth were trained to assist the ant’s staff.

Never having previously been part of a youth group, Marcel discovered that group meetings gave him an opportunity to learn new things. “After joining, I am learning to be curious and ask questions and trying to find scientific reasons behind many things that happen around us,” says Marcel. Not a fan of science classes, Marcel has found them more interesting since joining the science sessions at the Youth Group. Performing live experiments and looking through microscopes have helped Marcel to understand science concepts better. “Before these science sessions, I had never seen a microscope. But now I am able to use one and gradually understand the reason behind a particular science concept,” he says.

Marcel believes that life will change for the better. Being an active member of Project Dolphin’s Youth Campaigns on sustainable development in the area, he brims with energy and has a vision and plans to build a better community. He wishes to increase awareness among his community members about irresponsible felling of trees in the village. Marcel and his friends organize dramas and road shows to spread awareness about the issue. “I now have the confidence that we can work towards a better future and I look forward to a positive response from my community.”

Despite a deep interest in India’s history and current events, social science remains Marcel’s all-time favorite subject and fuels a dream of becoming a professor. He is committed in his ambition to overcome poverty through education and in the process, guide other teenagers from similar economic backgrounds. He is an inspiration to many young men who now have come forward to take part in community activities in the area. The youth of Bengtol today are heralding a wave of change and new hope shines brightly on the horizon of this remote village in Lower Assam.