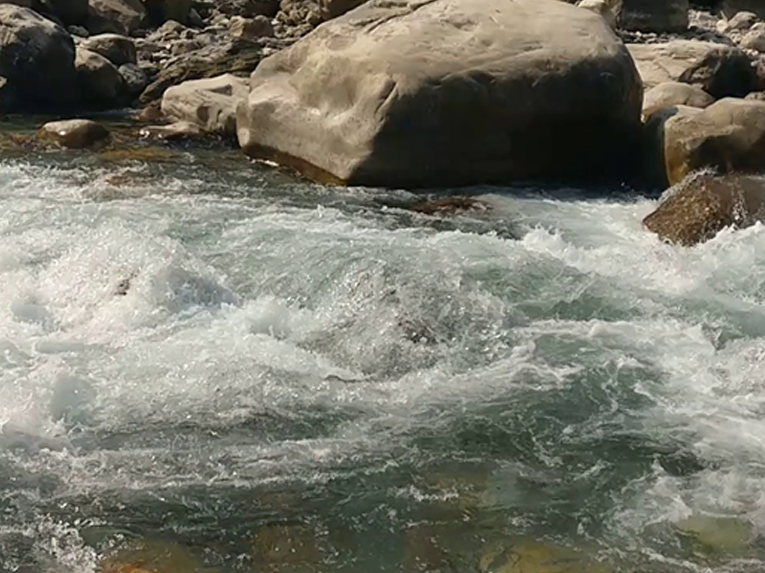 As the clean and sparkling Ramganga flows by the banks of Chaukhutiya block in Almora district, Uttarakhand, it reflects the passion and enthusiasm of the local children and youth who restored the river from the clutches of pollution. The river, once contaminated and dead, now teems with life. The campaign to save Ramganga started off as an act of passion for the children and youth of Chaukhutiya and soon gathered momentum to become a full-blown social movement, with local residents, businessmen and clubs joining hands. “It was unacceptable to lose the Ramganga, which has touched our lives in such intimate and irreversible ways, to unchecked pollution,” says Ramesh, one of the young adults involved in the SAVE RAMGANGA campaign.

These zealous young adults of Chaukhutiya, focused on and alert to pollution-free environment issues, were already practicing water conservation in the area under the guidance of the local Green Club – a terre de homes partner. The children realized that the major cause of the slow end of the river was unchecked chemical waste from local factories and waste from the nearby towns and cities routinely flowing into the river, clogging its free flow. The children took up the mantle of creating a focused awareness drive among the people of Chaukhutiya and its surroundings.

On 22nd November 2015, more than 200 children and young men along with the Government school children, under the supervision of the Green Club members, started cleaning the river, within their limited means. They cleaned more than a 2 km stretch of Rāmgangā near the Chaukhutiya market and ensured proper disposal of waste.

The efforts of the young members of the community stirred up actions from several social groups. The Women’s Group submitted a charter of demand and a complaint to the District Legal Services Authority calling for appropriate action against disposing garbage in the river. The Uttarakhand Youth Network also joined the SAVE RAMGANGA campaign and along with the Green Club demanded clean water resources for Chaukhutiya through a memorandum to the Government seeking greater insight into the Government’s waste disposal policy in the state. Following this memorandum, the Government has proposed to develop a 3-hectare waste collection site in Chaukhutiya block. The positive step by the Government is seen to be a direct outcome of the unyielding drive by the children of the area to keep their river and environment pollution free.

Green Club representatives and the children continue tirelessly in their appeals to the community to keep the river clean, through several cleanliness drives and anti-pollution awareness programmes. Recently a local group called Ramganga Seva Samiti, comprising civil society members has been formed to keep the river and surrounding area pollution-free. As of September 2017, the group had built more than 300 small dumping areas around the ​​Ramganga banks and has put ample dustbins on the streets. Today, conscious of the benefits of proper waste management and a clean environment, the community refrains from polluting the river. Age old neglect is now replaced by awareness and dedicated involvement of the community.