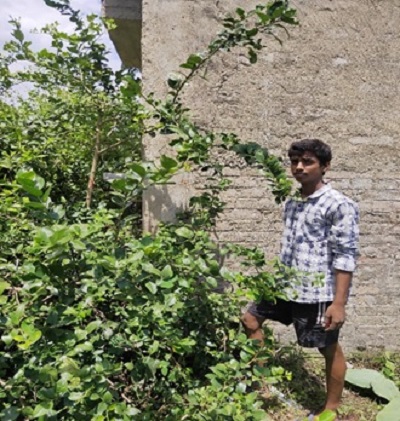 Meet the curious 13-year-old-boy, Anand from Dariya Pur Village, Bihar. Drawing inspiration from Greta Thunberg, Anand is a young creator who wants to help his community live sustainably while being environmentally aware and conscious. He is one of the most active members of the youth coalition and is an inspiration to young and old. He speaks enthusiastically about planting trees and even mobilized people to set up kitchen gardens to help them with food produce during the Covid-19 lockdown.

Anand’s village is severely dry, arid land located in the eastern state of Bihar. The region is drought prone and extremely backward, with temperatures recording between 45-47 degree Celsius in summer. Women in the village still use chulha or earthen stoves to cook that requires burning pieces of wood and blowing into a straw to light fire. The emanating smoke settles in the air causing toxic fumes. Anand’s mother would cook on a chulha too—a fact he claims took her life. His mother’s death moved him in many ways. From the tender age of 5, Anand became socially and environmentally aware of his surroundings. His curious mind would wander to experiment with maximum utility eco-saving models to save water, use electricity, and so on. He pledged to help people around him through his climate smart initiatives.

The village he lives in relies on ground water for use. Villagers use hand pumps to extract water from the ground. Every summer, the hand pump in Anand’s house would run out of water as the ground water would dry. Anand experimented with the knowledge he gained from one of the lessons on ground water harvesting taught by experts from DISHA VIHAR, a terre des hommes partner. With help of his friends Anand dug a 3 foot deep pit in the ground outside his house to collect rain water, covered by makeshift cloth panels. His friends followed suit. Over the next months, the boys recorded the amount of rain being received and the amount of water being stored in the pit. In the first instance, the extremely parched ground would soak up rain water, leaving the hand pump still dry. However, the boys continued to record data and the amount of water being stored in the pit.

In about six months, more and more water was available from the hand pump. As per Anand’s own analysis, ‘the amount of time it took to fill a bucket reduced by 5 minutes’. This would mean more ground water for use.  Alongside, Anand instilled plank diversions for waste water from kitchen to be diverted into the pit to allow for maximum utility. Resultantly, the hand pump has not run dry in the summer months. Anand, along with his friends have extended support to build similar ground water pits for the village. Anand relied on his sheer grit, determination and looked upto inspiration from books, You tube, when he was turned away by District Authorities. This young creator is who the world needs today.