Living off the land: Papdi’s story 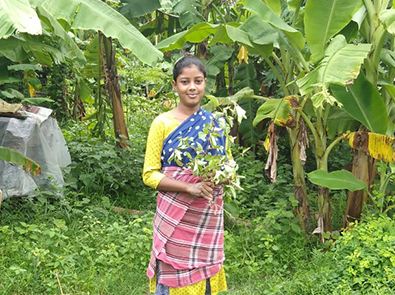 “Together we can!” says young Papdi and her conviction is infectious. Hearing her talk about her struggles, the extreme poverty that her family faced, almost dropping out of school  – it’s stunning to see so much positivity.

Hailing from the small village of Denuya in West Bengal, India – Papdi comes from a community where the struggle for survival used to be a daily fight. tdh supported Project Nishtha, has not only managed to bring in a sense of hope in these areas but has also shown them the path to a better life.

Papdi first came into contact with Nishta many years back when she was in Grade 7. Since then she has grown in her associations with the organization to engage, become more aware and finally becoming the leader of the Youth Federation. She directly supervises 50 youth group leaders who in turn each have their own groups to monitor.

Brought up in a community where agriculture is the backbone of most livelihood options – she says her inclination towards the environment was always very strong. However, it was the project workers or didis (elder sisters) as they are called who helped her understand the threats to the environment and the concept of ecological sustainability. It is armed with this knowledge that Papdi and her team of youth members conducted a surveillance of their village when they realized that irrigation facilities and hence agriculture was suffering. Their survey threw up some interesting findings where they realized that the central source of irrigation to their village was a man-made channel which allowed water to flow in from the river to the fields. However, the channel was narrowing down in places because of accumulation of garbage, silting and other practices along the shores. Therefore not only was the inflow of water supply becoming irregular but during the monsoons – the water would also not have the space to flow out and would end up flooding the land and the destroying the crops.

The youth group headed by Papdi – started the long process of completing re-structuring the channel. They knew the work would be extensive but as Papdi said – “We live off the land. How can we not protect it.” There were several hurdles to jump over. At one level the group had to convince the villagers what they needed to do and on the other hand they needed to convince the landowners who were mostly absentees that this work was much needed. After a prolonged period of conversations, meetings, going from one place to the other for the necessary investments and permissions – work finally started on the irrigation canal early this year.

“This canal will change the lives of the 5000 people in this village.” Says Papdi. “They will be able to grow crops to the full extent and not only will their food security be taken care of but they will also have enough yields to be able to save away for a rainy day.”

Papdi also understands that just getting the canal constructed is not the end of the road – and therefore she has also started a campaign to make people more aware about the maintenance of the canal.

The COVID-19 pandemic and the subsequent lockdown has stopped work for now but Papdi is raring to go as soon as things ease out. About Papdi: Lives with her parents and her grandmother. Her father runs a small shop and Papri herself supports her family through dance classes…..she wishes for a world where girls would get equal opportunities like boys and complete their education. Where they would make something of themselves.